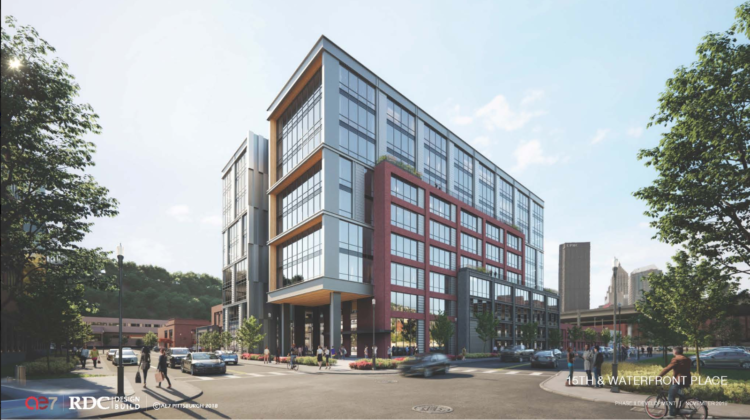 Designed in collaboration with the Strip District-based architecture firm AE7 and located across the street from the original District 15, phase two of the development is slated to include two stories of retail space and a total of 205,000 square feet of mixed-use offices across seven floors. Other amenities include private terraces, 360 parking spaces, a loading bay on Waterfront Drive and a fitness and game center on the ground level.

Principals from the development company RDC Design + Build Inc. reported to the City Planning Commission on Tuesday that they are on schedule to begin construction in July on their blockbuster development. The complex can be accessed from Waterfront Drive or Smallman Street at 15th St. Flexible retail space on the Smallman St. side of the building. Courtesy of RDC.

RDC’s partners in the venture are CBRE and Orangestar Property Advisors and Investors.

Speaking to NEXTpittsburgh, RDC principal John Deklewa says the building will be optimized to attract high-profile tech tenants like Facebook, who snapped up space in District 15 earlier this year for their virtual reality division.

For cutting-edge companies doing in-house research and development, flexible office space is a must and developers are building with that in mind. “There are a lot of trends going on in the tech industry,” says Deklewa, “and the Strip District caters to the trends.”

Deklewa says the Strip District has the added benefit of being close to both cutting-edge research institutions and some of the city’s best-known restaurants and cultural offerings. Even with District 15 Beta’s collection of high-end perks, he says, “the neighborhood itself is the best amenity we could offer.”

According to RDC’s estimates, the retail sections will be ready for occupancy in May of next year, with the offices opening their doors in September.